The Aerial Target is the first radio-controlled unmanned aircraft, designed by Henry P. Folland with radio gear by Archibald M. Low, built during (1916) and shortly after World War I at the Royal Aircraft Factory (RAF, it was renamed the Royal Aircraft Establishment, RAE, in 1918) at Farnborough, England.[1-4] Henry Philip Folland was an English aviation engineer and aircraft designer.[5] Archibald Montgomery Low was an English consulting engineer, research physicist and inventor, and author of more than 40 books.[6]

The Aerial Target is intended both for defence against Zeppelins and as a flying bomb. In the former role it was planned that it would be controlled from the ground, but in the latter role control from an accompanying manned aeroplane was also considered.[3] This project was called “Aerial Target” or AT a misnomer to fool the Germans into thinking it was about building a drone plane to test anti-aircraft capabilities.[4][6] 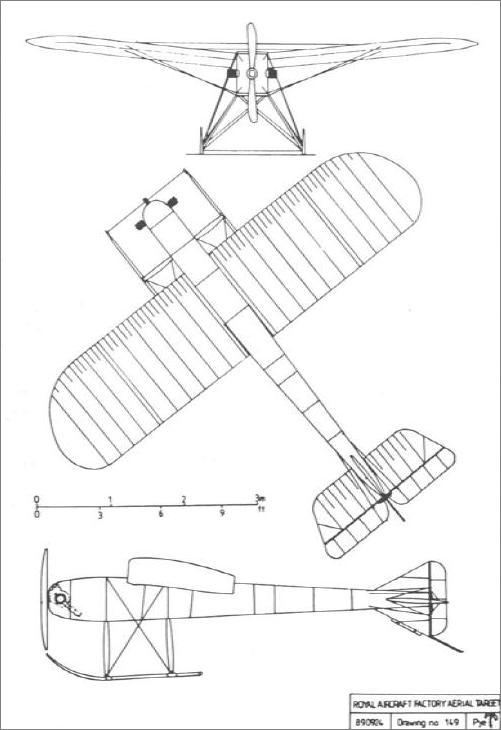 The AT is a small, weighed 227 kilograms, all-wood monoplane, with a high wing. The control in flight was carried out by using the vertical and horizontal rudders. Lateral stability (in aircraft roll) was provided by bending the wing. The wire antennas were stretched between the ends of the wing and along the fuselage, leading to the wooden box of the radio command control system that was located in the tail. Each antenna is designed to receive the signals of a particular frequency. Signal, received by antenna, closes a relay of the electromechanical autopilot, and the autopilot’s actuators are operated by using of the power from the propeller’s shaft through a reduction gear.[4]

As it was planned initially, Aerial Target should be launched from a pneumatic catapult in case of detecting of Zeppelin. The operator, holding the AT in the field of view, should raise the device to the desired height and bring it close to Zeppelin. In the case of miss, AT had to be sent to the ground and landed on the flat ground (with using of ski gear) for reuse. If interception of target was successfully, the detonator should be undermined on command from the ground, and about 40 kilograms of explosives should strike the Zeppelin.[4]

Till the spring of 1917, the six examples of Aerial Target (with A8957 – A8962 serial numbers) were constructed.[3] However, all three tests of AT, conducted during 1917, were unsuccessful due to aircraft’s crashes. Nevertheless, ability to the remote radio control of the aircraft was demonstrated. Caused by detected faults and decreasing the danger of Zeppelins’ attacks, “Aerial Target” project was closed soon, but theoretical and practical results of this project were successfully used in further developments.[6]